When a tornado hits, it takes a Village to respond

On Wednesday, April 8th at 10 PM, while the wind and rain picked up force outside, Indian Hill Rangers
dispatcher Mark Milliron was watching intently the weather monitors inside Village Hall. He tracked the
storm’s path as it moved through the region and headed toward the Village. At 10:26 PM, Hamilton
County issued a tornado warning triggering the Village’s four warning sirens located at the Water Tower,
the Little Red School House, Green Acres, and the Indian Hill Elementary School. At 10:41 PM, Ranger
Milliron received the first call on the storm from a resident on Camargo Road who reported a tree had
fallen on their house. Village Hall lost power and the generator quickly kicked in. Within the next hour,
numerous calls started to flood the dispatch station from automated fire and security alarms systems.
Ranger Milliron briefed Lieutenant Frank Cogliano regarding the incoming calls for alarms and fallen
trees. Lieutenant Cogliano then dispatched the Rangers on patrol to verify the safety of residents who
could not reached by follow-up calls, and to assess hazards and damage throughout the Village.

At 10:55 PM, Ranger Milliron followed standard procedure and paged the Public Works Emergency callout
number to notify the team of the tree damage throughout the Village. Public Works Street Foreman
Shawn Krebs pulled in 4 Public Works employees to start working clean-up along Blome, Camargo,
Shawnee Run and Given Roads where most of the damage was centered. The downed power lines
caught in many trees presented additional safety risks to the Public Works personnel removing those
trees from the right-of-way. Working in the dark of night compounded the risk as they coordinated their
work with the Rangers to address the most pressing safety issues.

In parallel with the Rangers and Public Works efforts, Fire Chief Steve Oughterson, who had been
listening to the storm reports on his 2-way radio, contacted Captain Francisco Caceres to head to the
Village firehouse to setup their Emergency Operations Center (EOC). With the trees and wires blocking
street access in many locations, the fire department and safety teams would need to know how to safely
reach resident homes requiring assistance. Captain Caceres used a large map and markers to track
blocked roads within the Village.

Over the next 8 hours, Captain Caceres coordinated status on safe pathways within the Village to Fire,
Safety and EMS personnel, Ranger Milliron and to the Hamilton County Communications Center to
ensure that emergency runs to residents were sent via open routes. Fire Chief Oughterson contacted
the 9 firemen on duty from Station 64 (Indian Hill) and Station 65 (Madeira) as well as 2 medics to help
work the storm emergency. He also reached out to 3 Deerfield Township Safety personnel for
additional help with the increasingly dangerous situation.

What the Rangers, Public Works and Fire and Safety teams did not yet realize was that, between 10:37
and 10:40 PM, a tornado with 85 MPH winds had swept through the Village, the first tornado to touch
down within the Village in the past 42 years. The tornado impacted a 3.3 mile stretch of the Village,
beginning on Keller Road and winding through Blome, Camargo, Kugler Mill, Given, Shawnee Run, and
Park Roads before heading toward downtown Milford. Village report logs reported the tornado took
down over 36 trees, 34 telephone lines and caused structural damage to 10 houses. Duke replaced 12
telephone poles on Given Road alone. Police Chief Chuck Schlie said he had never seen so many large
trees and telephone poles snapped in two from a storm.

Jason Adkins, the Public Works leader for the Village, indicated the tornado seemed to jump up and
down along its path, leaving some residents with significant tree and home damage while leaving their
neighbor’s yards untouched.

The first Duke truck arrived in the Village at 2:07 AM Thursday morning to work on fallen power lines on
Shawnee Run Road. Initially, Public Works tries to stay out of Duke’s way to let the Duke team manage
the downed electric lines along the storm’s path. By mid-morning Thursday, 10 to 12 Duke repair
vehicles were working on Given Road, one of the hardest hit areas in the village.

By 7 AM Thursday morning, Ranger Milliron took over 100 calls on fallen trees, telephone poles, and
security alarms as well as sending lists of downed utility lines to Duke Energy. The Rangers, Fire, Safety
and Public Works teams worked throughout the night, going on foot where roads were impassable, to
make sure no injuries to residents had occurred, and clearing trees and debris off the roads. The
Rangers setup road closure signs on Given, Blome, Camargo, Shawnee, Given, Kugler and Drake Roads as
fallen trees and power lines had created significant safety hazards. Chief Schlie reported the road
closures lasted from 1 ½ to 4 days.

The Covid-19 pandemic played a role in hindering the Village’s response, as the Public Works employees
who would normally work in teams, traveled alone in their vehicles to clean up fallen trees and debris.
“Understandably” Jason Adkins said, “residents impacted by the storm wanted to come up and talk with
my team directly. We had to remind folks to maintain social distance as the team worked to clear
streets.”

Over the following week, Public Works employees removed over 120 truckloads of fallen trees, limbs,
and debris. To keep the trucks rolling, the team utilized nearby Indian Hill dump sites to save valuable
time and help speed the road re-openings.

On Friday morning, Fire Chief Steve Oughterson brought in the Drone unit from Hamilton County to take
aerial video footage of the tornado’s damage across the Village. Chief Oughterson said the high-powered
drones, operated by FAA licensed pilots and equipped with infrared cameras, provided the Fire
Department with visual access to areas otherwise unreachable. The National Weather Service utilized
the video to identify the tornado’s severity and route taken while passing through the Village.

In the days following the storm, the Village team remained in regular communication with Duke Energy
to track power line repair efforts to bring residents power back online. Throughout the cleanup, Duke
Energy, which had nearly 300,000 residents lose power from the 14 tornadoes that hit the region that
night, worked closely with City Manager Dina Minneci and Assistant Manager Jon West. On Friday,
Duke’s Senior Government Affairs Specialist helped to expedite the opening of the remaining two
impassable streets in the Village which were presenting safety issues to the local residents.

Fortunately, no serious injuries resulted from the tornado and property damage was relatively limited
considering the force of the winds. By Easter Sunday, most of the telephone poles and power lines were
repaired, roads were reopened, and Jason Adkins gave his Public Works team a much-needed day off.

The response to the tornado across our Village departments was most impressive as the teams worked
around the Covid-19 restrictions. Village personnel coordinated quickly and effectively across
departments to bring stability and safety to our community. Many thanks to Chuck, Dina, Jason, Jon and
Steve for their teams’ dedication throughout the tornado, and to Ranger Milliron/Captain Caceres for
coordinating inter-departmental communication throughout the night of the storm.

Thank you to those teams that worked to ensure the safety of the residents throughout the night of the
tornado:

For pictures and drone footage see below. 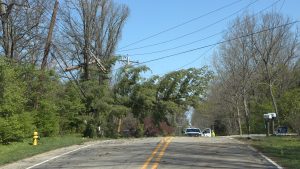 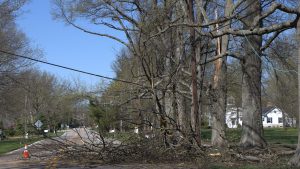 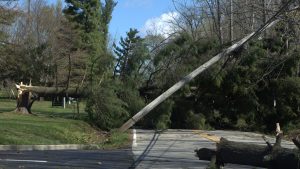 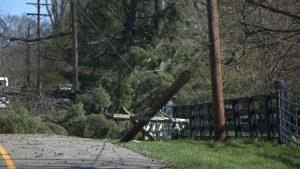 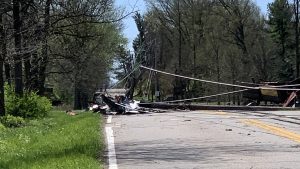 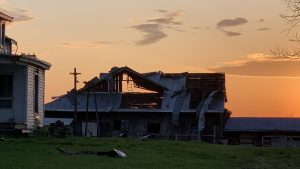 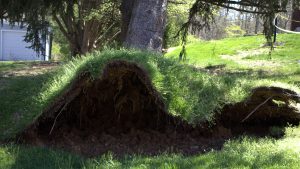 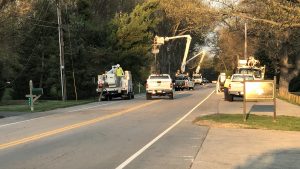 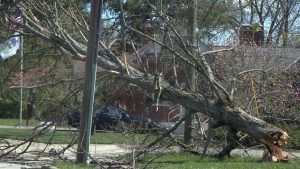 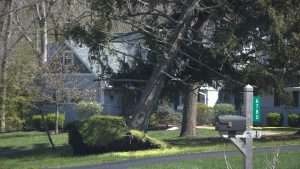 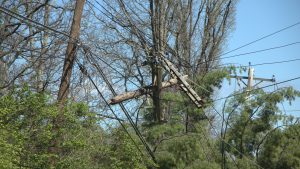